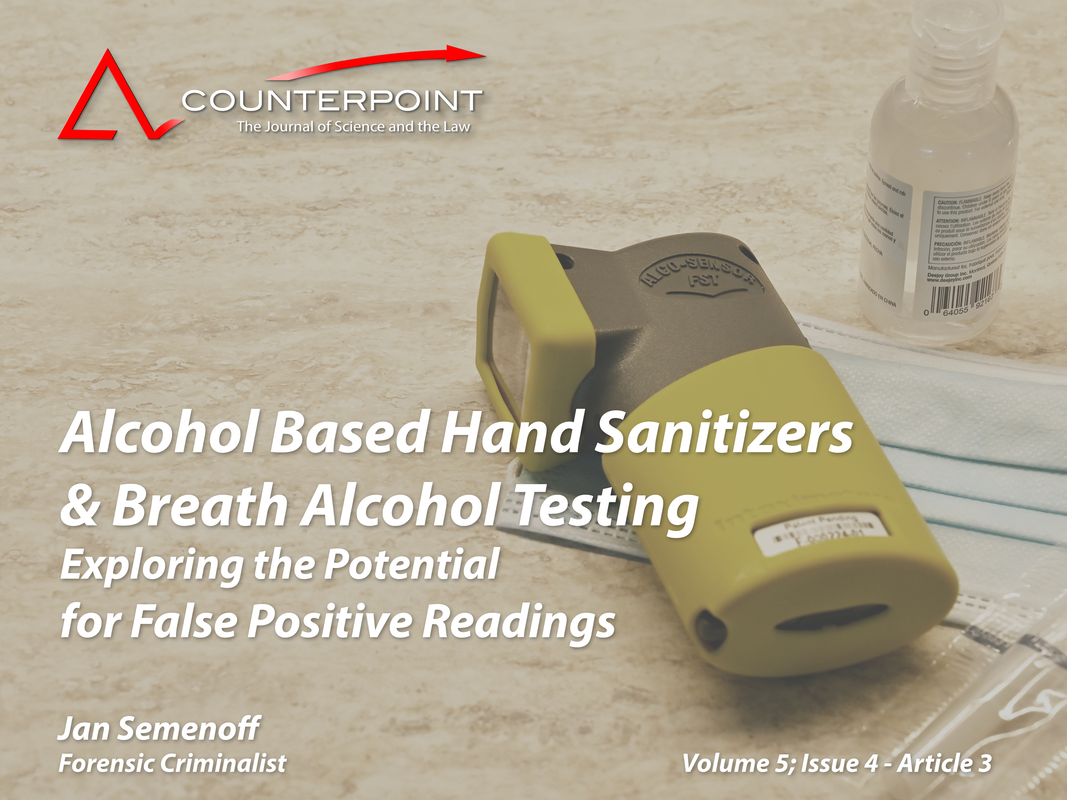 It has long been declared by the state forensic science authorities that alcohol-based hand sanitizers (ABHS) do NOT create the potential for false positive breath alcohol readings. The assertion is based on the low amount of dermal (skin) absorption of ethanol, given the brief amount of sanitizer, and contact time, that it is on the subject’s hands. Is this realistic? Is this correct?
In reviewing police breath room videos, a common thread emerges. Often, the breath room pulls double-duty as the fingerprint area (or worse, where we find the coffee pot or microwave). I often see breath test technicians disinfecting their hands (that’s a good thing) before performing the breath test. In the age of COVID-19, I’m also seeing breath room videos where the test subject disinfects their hands (again, a good thing) before providing a breath sample, or a series of samples. However, if the breath sample is provided immediately after hand disinfection using an alcohol-based hand sanitizer (ABHS), the potential for false positive breath results exists. That, of course, is a bad thing…
Four separate studies over the last decade cast doubt on those assertions.  Links to the studies, where available, are included in the reference section. Let’s examine their findings.
​

​In 2016, Yale University School of Medicine researchers aimed to investigate the effects of alcohol-based hand sanitizers (ABHS) on a fuel cell breath alcohol analyzer (the Intoximeter Alco-Sensor III).
The researchers studied different experimental conditions:
Notice that the experimenters used typically dispensed amounts of sanitizer (one or two pumps) rather than carefully measured volumes (i.e. - 3.5 mL). Additionally, the "hand dryness" time was left to the test subject, who dried their hands until they felt dry. Researchers did this specifically to mirror real world clinical conditions.
Under ALL experimental conditions, alcohol was detected in breath immediately, and at 1 minute after use of ABHS. In fact, the breath alcohol readings were staggering when the foam or gel was applied with immediate breath alcohol testing. The initial readings up to one-minute following application averaged 0.155 grams – basically twice the legal limit, with readings as high as 0.62 grams. Yes, you read that right - 0.62 grams/210L - almost 8 times the legal limit.
​Then, the normal evaporation curve reduced the reported readings dramatically. After five minutes, the readings were negligible (about 0.01 grams). After ten minutes, basically zero, although two test subjects still showed positive breath alcohol readings at 11 and 16 minutes.
Allowing the hands to dry, or donning gloves after application of the ABHS significantly reduced the false positive readings. Notice the gloves or dry hands lines at the bottom of the graph are basically creating no reading at all.
They concluded that the use of ABHS by individuals administering breath alcohol tests may result in false-positive detection of alcohol. They recommended that breath test operators using these devices should consider traditional hand hygiene with soap and water. Overall, they concluded:

​In 2017, Missouri breath test program forensic criminalists published their findings in the Journal of Forensic Sciences. They used several evidentiary breath alcohol devices – the Intoximeter DMT, the Intoximeter EC/IR II, and the Intoxilyzer 8000. Test subjects applied 2-3 grams of either gel or foam ABHS at 70% ethanol concentration and rubbed their hands together until they were dry. On average, 30 seconds transpired from the application of the ABHS until they provided their first breath sample.
​Overall, about 10% of the test subjects provided an initial false positive reading as high as 0.041 grams. About 30% of the test yielded an error or status message of some sort requiring a re-test.
​As expected, the evidentiary units performed very differently from the previous Yale University study. Let’s look at a summary of their findings by device:
Intoximeter DMT
Gel ABHS       5 of 25 subjects tested positive (0.003, 0.003, 0.003, 0.021, and 0.035g)
14 of 25 subjects generated a status code of some kind

Foam ABHS   0 of 20 subjects tested positive (0.000 grams)
9 of 20 subject tests generated a status code of some kind
​Their overall conclusion looking at all three devices was that the use of ABHS before breath testing could potentially lead to false-positive results. They felt that the positive results were generated due to inhalation of the ABHS vapors during application. They recommend that ABHS are NOT kept in the breath test room, and that a minimum of 15 minutes pass between application and breath testing. Additionally, they raise a concern for jurisdictions who only do one breath test.

​In 2009, an article appeared in the Journal of Addiction Medicine that identified that the use of ABHS gel caused false positive readings in both Ethylglucuronide (EtG) and breath test results. EtG is a biomarker tested during urinalysis that shows that he metabolite of ethanol is present in the urine.
Look at a past article...
We’ve addressed the issue of EtG testing and false positives following the use of hand sanitizer previously (The Effects of Hand Sanitizer on Urinalysis, Counterpoint Volume 4, Issue 4, Article 3; August 2020.)
The study was designed to mimic application of ABHS frequently, as would be performed in a clinical or hospital setting. The 18 test subjects applied two squirts of ABHS every 4 minutes for one hour (15 applications total). Breath samples were received at 20-, 40-, 60- and 90-minutes following application. Urine samples for EtG testing were also collected at 30 minutes and 6-hours post-exposure.
In summary, 13 of 18 of the test subjects produced false-positive readings. Although the breath alcohol readings produced were minimal (0.01 – 0.02 grams) in the false-positive cases the readings persisted for as long as 60 minutes following exposure. The unit used was simply listed as “an Intoximeter Breathalyzer with lower level of detection at 0.001 g%”.
The researchers concluded:
And yes, an 0.02-gram reading is perhaps not that high, but in zero-tolerance cases (Novice drivers, probation or release conditions, compliance monitoring, child custody testing, workplace safety, commercial transportation, etc.) anything above zero may have dire consequences.

In 2013, researchers from the University of California San Diego Department of Emergency Medicine examined the use of ABHS in conjunction with breath tests that would be performed in the clinical setting in an emergency department, or by police officers in the field. They identified that most commercial ABHS contain ethanol, at concentration of 62 - 70%. For their study, they focused on Purell Hand Sanitizer that contained 62% denatured ethanol. For the breath test device, they used the Intoximeter Alco-Sensor III.
The researchers divided their test subjects into three groups:
Of the 75 participants (25 for each group), all tests resulted in false positive breath alcohol readings - some quite significant:
Notice the range in all three groups from 0.001 - 0.134 g/dL. A reading of ZERO BrAC was never produced, even when the hands were allowed to dry. The researchers concluded that the use of common ABHS may cause false-positive readings with a fuel cell breath test device, even when the operator uses the hand sanitizer correctly. Additionally, the readings were elevated when more ABHS was used, and not allowed time to dry.

So, what do these studies establish?

First, the use of ABHS can create a false positive effect on breath alcohol readings. The problem is that the studies and the data obtained point in different, often contradictory, directions.

One final point. We are still not done with COVID. Plus, the “normal” flu season is fast approaching. The use of ABHS is far more common, and indeed required, than when these studies were published (before COVID). Stay safe. Wash your hands!