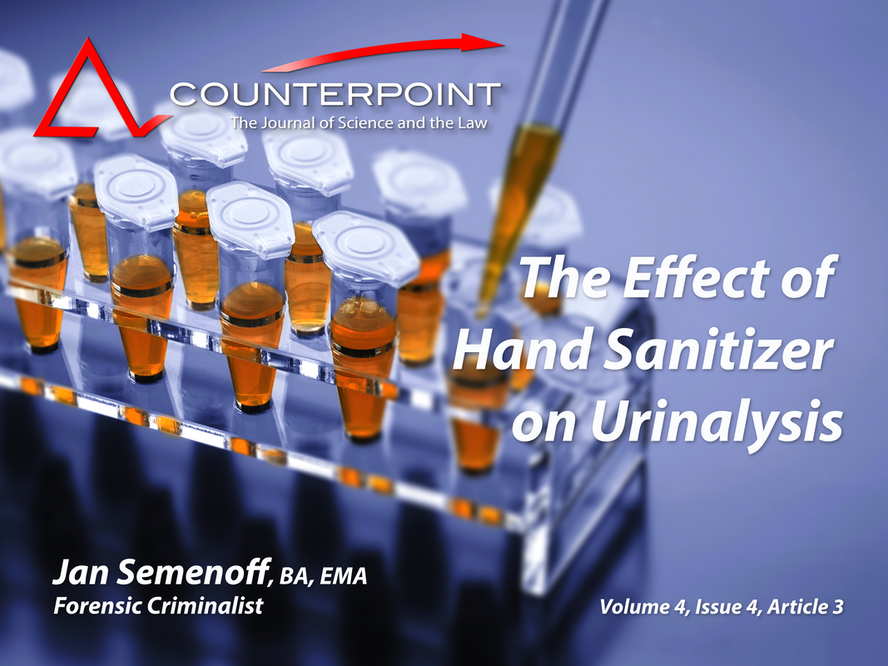 The Effect of Hand Sanitizer on Urinalysis

​​Many of us have been using a lot of hand sanitizer recently. Given the crisis surrounding the current pandemic, we should be applauded for using a lot of hand sanitizer over the last few months. You put it on when you enter public places like grocery stores or gas stations, and after touching the point of sale payment terminals. You put it on entering your place of work. You probably keep hand sanitizer in your car, in your office, and in your home. The key ingredient in most commercial or medical grade hand sanitizers is ethanol – plain old beverage alcohol, and it comes in with a very high ethanol concentration.
But, how is that hand sanitizer being absorbed and metabolized in your body? Can it be read in body fluid samples? Can false-positive effects occur? The answer, unfortunately, is “Yes”. It has long been declared by the state forensic science authorities that alcohol-based hand sanitizers (ABHS) do NOT create the potential for false positive breath alcohol readings. The assertion is based on the low amount of dermal (skin) absorption of ethanol, given the brief amount of sanitizer, and time, that it is on the subject’s hands. Is this realistic? Is this correct? Unfortunately, Alcohol based hand sanitizers can and do provide false positive breath testing results, under the right conditions.

​
​It is used as a biomarker to test for the past presence of ethanol in situations where absolute abstinence from beverage alcohol is necessary, i.e. – military personnel, commercial pilots, health care professionals or following alcohol treatment programs, and of course, situations involving probation, and conditional or early release.
​

Ethanol is chemically volatile (meaning it evaporates at room temperature) and also considered a fugitive substance, in the sense that it stays in the human body for only so long before it is either metabolized or eliminated completely. As a rough rule of thumb, ethanol is present and can be measured in various body mediums as follows:
​
​
​Urinalysis can provide another way of measuring the ethanol in the system directly, or indirectly by measuring the metabolite, EtG. But it is fraught with errors, with both false-positive and false-negative results. Its use should be considered instructive at best, and not definitive.
EtG Hair and Nail (Keratin) Testing Under Scrutiny

The U.S. Substance Abuse and Mental Health Services Administration has issued an advisory warning against using a positive EtG result as primary or sole evidence of drinking. They write that the EtG hair and nail test is "scientifically unsupportable as the sole basis for legal or disciplinary action" because the highly sensitive tests "are not able to distinguish between alcohol absorbed into the body from exposure to many common commercial and household products containing alcohol and from the actual consumption of alcohol." (Center for Substance Abuse Treatment, 2006)
It has been well established that EtG and EtS levels can be detected in urine samples anywhere from a number of hours to a number of days after the ethanol has been metabolized and can no longer be detected or empirically measured. Keep in mind that ethanol can only be measured in body fluid samples for less than 24 hours after completion of ingestion, even following fairly heavy consumption episodes. This is why EtG and EtS readings are of use in forensic applications. Since EtG produces higher readings than EtS levels, and fall along a different metabolic pathway, the readings are reported concurrently in order to establish reliability and specificity towards ethanol.
​The disadvantage of EtG testing is that false positives are possible, and have been well documented, after exposure either incidentally, or from non-beverage exposure, such as hand sanitizers. It has been identified that exposure to mouthwash, fermenting foods, over-the-counter medications and dermal exposure to hand sanitizers have all resulted in false positive reported readings. Because the EtG levels can be detected in such small amounts, it is impossible to distinguish its presence between ethanol consumption and extraneous exposure to ethanol from other sources of contamination.
​

British researchers report that EtG is relatively stable in urine samples, but both false-positive and false-negative results have been reported in urine arising from bacterial contamination, particularly when samples are contaminated with E. coli. Keep in mind that E. coli is very common in urinary tract infections. This is another reason why EtG and EtS samples should be analyzed concurrently, as EtS is unaffected by E. coli contamination (Walsham & Sherwood, 2012).
EtG levels are generally considered highly indicative of recent consumption of ethanol. It has been long established that EtG levels greater than 1000 ng/mL are considered an indicator of “heavy” consumption within the previous day or so (Shukla and Sharma, 2017).
​I had a recent case where the defendant’s urinalysis reported an EtG value at more than five times that level (5272 ng/mL). This would seem to indicate consumption of more than five times a “heavy” drinking period. Is this even possible, or are we getting into the range of alcohol toxicity? The concentration of the EtG and EtS readings themselves gives rise to the probability of contamination by ethanol other than beverage ethanol.
Yale University School of Medicine researchers report that exposure to hand sanitizer can cause false-positive EtG readings.
​Italian researchers Salomone et al (2018), from the University of Turin write that,
​And while not close to our 5000+ ng/mL level, researchers from the University of Florida, conclude:
Walsham & Sherwood additionally report:
​The possibility that the EtG and EtS levels are present due to repeated, multi-day, frequent and copious use of hand sanitizers cannot be excluded. Keep in mind that the hand-sanitizers being recommended to combat SARS-CoV-2 and COVID-19 contain 60-80% of ethanol by volume, higher than even normal commercially available hand sanitizers than come in at around the 60% concentration. The fact that measured urinary EtG and EtS levels can be reported at levels so incredibly high suggest the possibility of a source other than normal consumption of beverage alcohol under certain circumstances.
That being said, pass the hand sanitizer...