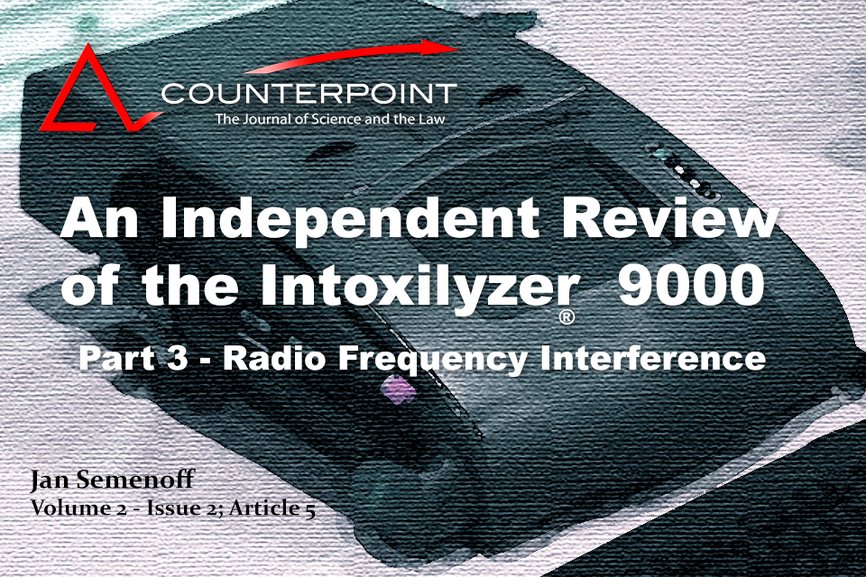 An Independent Review of the Intoxilyzer 9000

​The opportunity to conduct an independent analysis and performance review of a new breath alcohol testing device is rare, particularly the higher-end, evidentiary-level units. Access to these technologies is stringently controlled by both their manufacturers and the police and government agencies that control them. Additionally, state agencies are often reluctant to publish the results of their official assessments and analysis of the devices.

When given the opportunity to perform such a review on a new Intoxilyzer 9000, I designed a series of experiments to quickly analyze the overall performance of the device. I attended the device’s location with colleague Tom Workman (1948-2019) to determine its suitability and reliability in a number of key areas, including:
This article will examine the capacity of the device to detect Radio Frequency Interference. Part one provided a general overview of the performance characteristics of the Intoxilyzer 9000, looked at the apparent accuracy of the device using simulator readings, and examined the ability of the device to “flag” false-positive readings caused by fresh mouth alcohol contamination. Part two examined the unit’s specificity towards ethanol detection, and its ability to identify the presence of an interferent chemical
An important caveat​:
This assessment on an individual Intoxilyzer 9000 was done in circumstances of complete access to the device, but under limited time constraints. Simply put, we did not have the time necessary to run exhaustive testing on the 9000 to generate the raw data necessary to ensure a proper statistical analysis. Over a ten-hour period, we were able to run about 60 individual tests on the 9000, and inspect its interior and component parts. We need further access to these devices to draw meaningful conclusions.

As an editorial position, Counterpoint, calls on the manufacturers of ALL breath test instruments, and all government agencies that operate and control them, to make these devices, used in criminal proceedings as evidentiary collection devices, available for independent review and analysis. Transparency regarding both the physical and software design, their manufacture, and the maintenance and operation of the devices is critical in maintaining a degree of openness and trust towards the numerical BrAC results generated.

The effects of radio frequency interference

What is Radio Frequency Interference (RFI) ?

​Radio Frequency Interference (RFI), also called Electromagnetic Interference (EMI) occurs when an electrical disturbance is generated on an electronic device by an external electrical source. This source may affect electronic or electrical circuitry, and degrade or otherwise impede the performance of the circuit affected. The effects can include data corruption, an increase in error rate, total or partial data loss, and may even go so far as to stop the affected device from functioning altogether [1].

​​In our modern and increasingly connected world, the use of radio transmission and receiving devices is ubiquitous, and today certainly more so than just a few years ago. When modern police breath alcohol testing devices were invented, no one conceived of high speed, Wi-Fi enabled, 5G devices used regularly to access a continuous stream of Internet data, text messages and voice communications. Few could have foreseen a world where powerful, interconnected electronic devices were so small, that not only do they easily fit in the palm of your hand, but we lose them in our own homes (along with our car keys).
​​A quick peek at the Wi-Fi networks available locally to my computer indicates that about 20 different signal sources are in my immediate vicinity. Additionally, cellular phones, smart devices such as tablets or other Wi-Fi enabled devices (now including everything from Blu-Ray players to “smart” refrigerators), and other Bluetooth devices are all emanating their digital transmissions, regardless of whether they are on an active call or not. This background “noise” can create the situation generally associated with RFI and EMI emissions.
​ 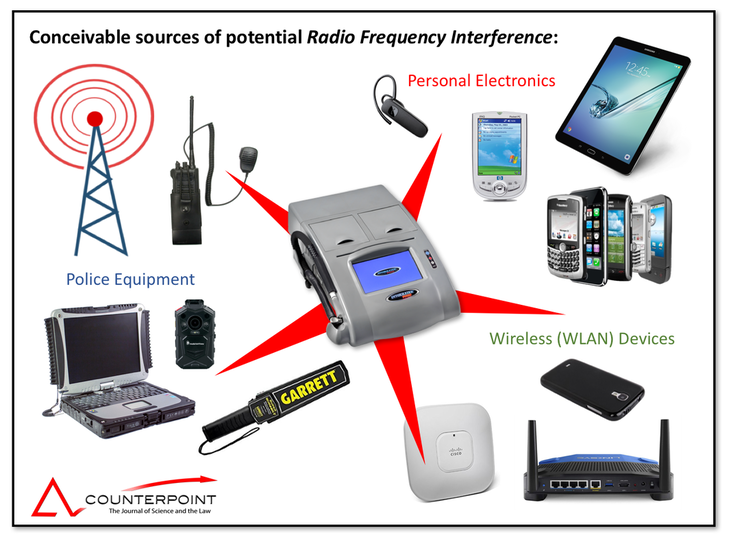 Figure 1 - Potential sources of Radio Frequency Interference include personal electronics, such as cell phones, smartphones and Bluetooth headsets; Police equipment, including radios, cellphones, and laptops or Body Worn Cameras that transmit wirelessly, and; Wireless LAN (WLAN) devices in the police station that set up the local area wireless network, if any.
​​To compound the problem in police evidentiary breath testing, we have such sources as the cellphones of the people in the vicinity, police portable radios, and now, police body-worn cameras and wireless laptop computers, all transmitting notification signals back to their respective sources, telling the electronic Internet (and local intranet) world, “I am here…”

Keep in mind that you do NOT need to be actively transmitting a voice or text message for the RFI signals to be generated.
​The effect of these radio frequencies on the internal operation of breath test devices that use electronic circuitry similar to that of early computers is in debate. Accordingly, standard police procedures have been established in most jurisdictions in North America and Europe that prohibit the presence of active police radios, cellular telephones, and similar devices in breath test facilities.

This prohibition amongst police agencies is not unique. Most hospitals have policies prohibiting the use of similar radio or other electronic devices in patient care areas, where critical life-support or patient monitoring equipment is in operation. RFI interference to devices such as ventilators, patient monitors, pacemakers, neonatal incubators, motorized wheelchairs, and anesthesia delivery equipment has been reported and documented.

In 1983, shortly after the introduction of the types of technology used by the Intoxilyzer and similar breath test devices into general police service, the National Bureau of Standards conducted a study (“Effects of Electromagnetic Fields on Evidential Breath Testers”, 1983) and concluded that the possibility of erroneous Blood Alcohol Concentration (BAC) readings, influenced by various radio frequencies, was “severe”. There are numerous reported, albeit anecdotal, instances where elevated BAC readings have been observed due to the presence of known radio transmissions. The problem, frankly, in extrapolating from these observed instances, is the unpredictability and lack of reproducibility of the circumstances that apparently gave rise to the elevated BACs. As such, the cautious and prudent approach is to absolutely eliminate the possibility of RFI altogether.

So, ultimately, the questions are:

​Testing RFI effects on the Intoxilyzer® 9000

​In order to test the effects, if any, of radio frequency interference from cellular phone calls during an active breath test, we utilized two cellphones, calling one another in the general vicinity of the Intoxilyzer 9000, to create an active cellular transmission in progress. Both were Apple iPhone 6 phones, one operating on the Verizon network, the other roaming on the AT&T network. Breath tests were conducted with a zero BrAC test subject, and tests on a test subject with a known BrAC of 0.012  grams/dL.

The results are as follows:
​
​With a zero BAC test subject, the 9000 correctly reported a zero BAC reading, but only identified the presence of the active cellular calls on 2/5 occasions. In order to generate the RFI message, one of the cellular phones, on an active call, had to be placed within 2 inches (6 cm) of the external antennae. Any distance further than 2” would not generate an RFI DETECTED message.

In the next tests, the active cellular phone was placed within a 5-inch radius of the antennae while a test subject with “true” BACs of 0.012 grams/dL provided breath samples. The BrAC level was measured, initially from the Intoxilyzer 9000 itself, and verified using a recently calibrated handheld device (an Intoximeter FST). Our results were dismaying: With the active cellular calls under way, the 9000 provided two back-to-back readings of Zero and 0.026 grams/dL, both without indicating the presence of any RFI.

RFI detect circuitry - Under the hood:

A peek at the internal RFI detection circuitry in the Intoxilyzer 9000:

With the active cellular calls under way, the 9000 provided two back-to-back readings of Zero and 0.026 grams/dL, both without indicating the presence of any RFI. The test subject had a "true" BrAC of 0.012g/dL. 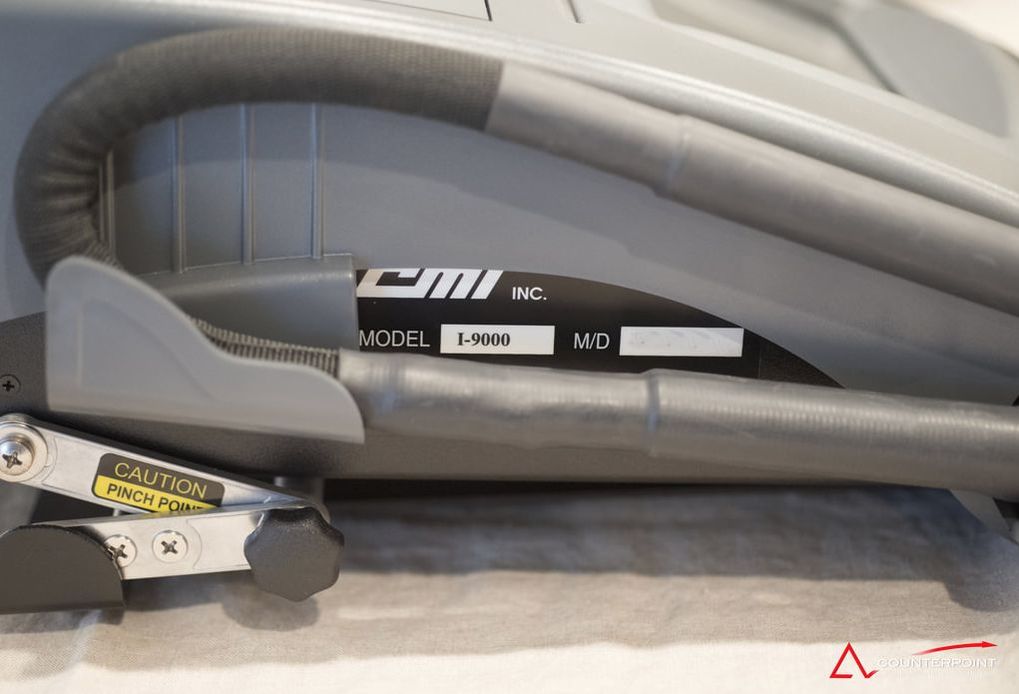 Figure 5 - The antenna lead (from Figure 4, top) is a flexible plastic circuit connector with three wires that runs underneath the CMI sticker on the left side of the 9000. Our tests indicated that a cellular phone, transmitting a voice signal in an active call, had to be placed within about 6cm (2 inches) of the CMI sticker/antenna location to generate an RFI DETECT message. It appears that this is the ONLY antenna location on the 9000. There were no leads from the main board antenna port, or antenna board, to the external heated sampling hose, also shown here.

​Relying upon the RFI detect circuitry to determine the presence of stray radio waves is insufficient. It appears that the source of any potential interference had to be within a radius of about two inches from the external antennae to be detected. It also appears that with an actual BrAC measurement (0.012 g/dL), the readings obtained may have been affected by RFI, both generating false-negative (Zero) and false-positive (0.026 grams) readings, without reporting the detection of any RFI present.
​As previously stated, this assessment on the Intoxilyzer 9000 was done under circumstances of complete access, but was time limited. Simply put, we did not have the time necessary to run exhaustive testing on the device to generate the raw data necessary to make a proper statistical analysis. We need further inquiry to draw meaningful conclusions.

​​Furthermore, a proper deprivation and observation period, both before and between the breath samples, coupled with the use of replicate testing (with close sample agreement) will help to establish the reliability of breath alcohol testing results.