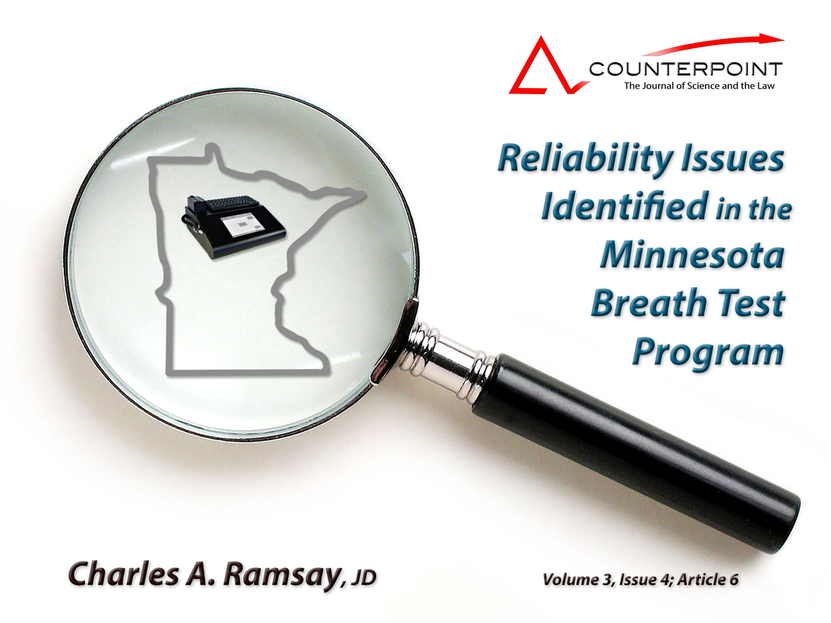 We've held off on releasing this article for almost a month, until the information was made public on the local news in Minneapolis. A link to the television news story is included in this article, which includes interviews with Ramsay and me.  Speaking as a Forensic Criminalist, this was a very good piece of investigative work by lawyer Charles Ramsay, who analyzed the issues by reviewing a ream of instrumentation data, closely examining it for trends that identified reliability issues.   (Editor)
Minnesota, several other states, and parts of Canada use the DataMaster DMT to test suspected drunk drivers. Our society blindly trusts test results produced by this and other breath test devices. Recently, we uncovered objective data that our blind trust in this machine is misplaced as it doesn't work as it is supposed to. The problems are significant malfunctions -- fatal flaws in some of the necessary, critical scientific safeguards used to ensure the final results are valid, reliable and accurate. Many of these critical safeguards have either been disabled, work sporadically, or don’t work at all.
My law firm obtained the raw data from well over 100 DMT tests over the last year. The data includes ¼-second measurements of subjects’ breath as it passes through the sample chamber. The data also includes the flow rate for each ¼-second measurement. From that data, we are able to calculate the cumulative volume as a subject exhales, as well as as the total volume of each sample. We can also calculate the slope of each sample at each ¼-second.
​

We have found that systems designed to ensure these breath machines measures only the amount of alcohol in a driver’s blood are broken. Instead, they can report the strength of alcohol in a person’s stomach from their last drink, reporting an erroneously inflated result. Other specific, objective criteria for breath sample acceptance are not what the Minnesota Crime Lab (BCA) has published and testified to. As has been reported previously – and we have found more evidence of -- the machines are reporting results that are substantially higher than any previous measurement. And when we say “substantially higher,” we mean “a jump so big that if it happened during the test, and not at the end, the machine would have rejected the sample outright as being contaminated by mouth alcohol.”
Interfering detection systems are turned off completely (“fuel cell”) or work sporadically. This means that everything from fingernail polish remover and acetone vapors present in the breath of "diabetics, dieters or highly exercised individuals" (The Minnesota Bureau of Criminal Apprehension's [BCA’s] words, not ours) is liable to skew breath test results higher than they should be.
We compared the data with the sample acceptance parameters and other specifications published by both the manufacturer, National Patent Analytical Systems (NPAS), and the Minnesota Crime Lab (BCA). Here is what we have found:
​
1. The DMT doesn't measure what it is supposed to:
Instead of measuring the amount of alcohol in a driver’s blood as designed, it can measure the strength of alcohol in a person’s last drink sitting in their stomach. Furthermore, it treats and measures other chemicals in a person’s breath as alcohol (e.g., Acetone from diabetics, dieters and highly exercised individuals) without providing notice of the interfering substances.
​
2. The DMT doesn't measure how it's supposed to:
Instead, it accepts breath samples that are not consistent with what the BCA has taught, published and testified to. For example the published minimum flow rate is 3.0 liters in Minnesota. But the DMTs follows their own criteria. Likewise, the DMT may not flag samples as “invalid” even when the published criteria is met. This results in an artificially high test result.
I’ve encountered a number of cases where the data points meet the “Invalid” criteria as published by NPAS and BCA, yet is not flagged as invalid. Instead the test result is printed without a reference to an invalid sample.
​
3. Finally, even when it measures properly the DMT often reports results higher than what it actually measured. We’ve had numerous cases where the final reading in the raw data is below a critical limit, yet reports a result over a 0.08 (or over 0.16 – the enhanced penalty in Minnesota). We’ve found this in many cases, but only a handful that occur at a critical level (0.08 and 0.16).
The problem is that we have no way of looking at the final printed test record and determining on its face whether the DMT performed properly in that particular case. It may take weeks or more to obtain and review data to prove it did not work as designed or in accordance with published criteria. 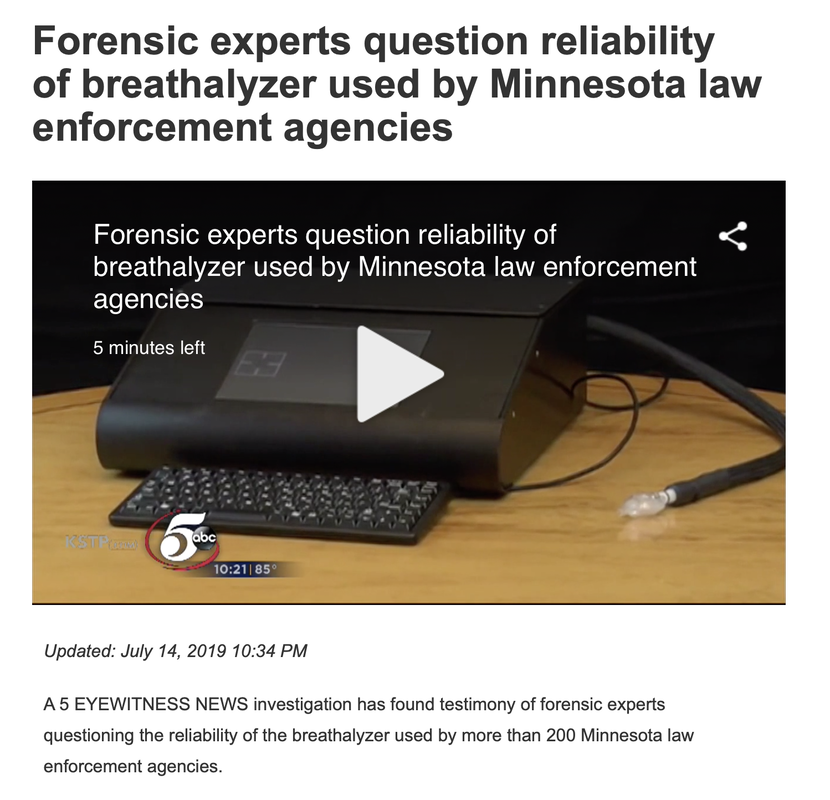 What we're calling for:

In a DWI, drivers are guilty into proven innocent (jailed, bail, immediate license revocation, lose jobs, automobiles forfeited – all without a hearing!). All the DataMaster breath test machines used in Minnesota should be taken out of service to fix these critical safeguards, and not be put back in service until someone competent conducts a thorough study to ensure the machines don't have other yet-unknown issues.
Looking at your client's history in a different light
Here is what started this off. The following is a letter sent by Chuck Ramsay to Counterpoint:
Jan,

I enjoy reading your Counterpoint articles and learn a ton from them. Occasionally when I encounter an issue I have to go back and review something I read previously.

In part 2 of your Diabetes article you address your testing with the DMT. You write:
I have a case that may contradict this. Minnesota uses the DataMasterDMT without the fuel cell option. In a current case, my client is a Type-1 Diabetic male in his mid-30's. He was stopped by a state trooper at night after having a few beers at a friend's house. My client's blood glucose meter was malfunctioning.

After breath testing, the jail nurse tested my client's blood, and reported a blood glucose level "over 600". She then gave him 12 units of insulin. My client was released shortly afterwards. He went home and tested his blood glucose level which was still 350 (?) and he had to administer additional insulin.

I've reviewed the data points (the 1/4 second measurements of "raw alcohol" and breath flow). The alcohol concentrations appear to be very similar, with the latter test just slightly lower (but very consistent with elimination over a very short time). I have not yet obtained the filter comparisons.

I have never encountered these facts with this type of data. Is something you can use to demonstrate the limitations of IR technology? If so, what can I do to help?