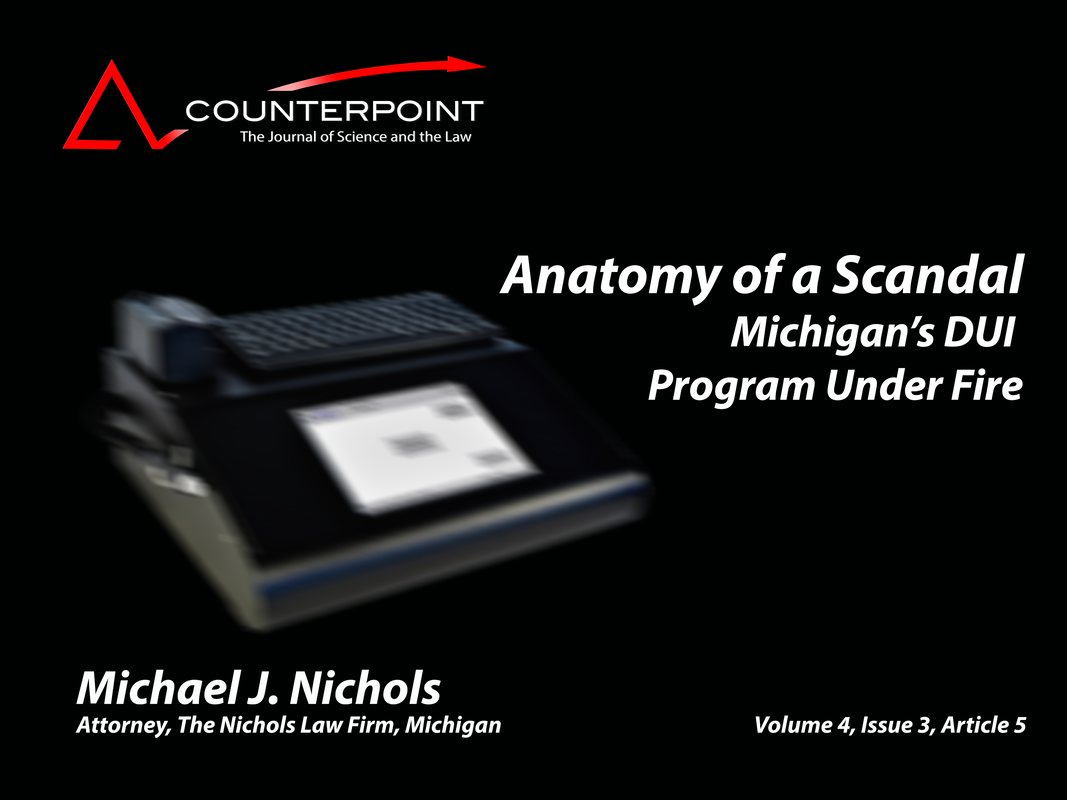 We've discussed in the past how human error or omission is the greatest cause of failure in breath testing. The recent scandal in Michigan highlights how cost-cutting and taking short cuts can undermine the reliability of breath test results.

You may download a free .pdf of this article HERE.

Anatomy of a Scandal

​Have you ever heard the idiom “The fox guarding the hen house?” That is the pitfall of the public trust in the state of Michigan in breath alcohol testing.
​

​In January 2020, I sat in a place I never dreamed: testifying shoulder-to-shoulder with Lt. Colonel Joe Gaspar before the Michigan Senate Judiciary Committee about what went wrong with breath alcohol testing and what we should do about it. My predominate point: This is more than just a “record-keeping” problem - it is a “prove it before you use it” problem (thank you, Justin McShane, Esq.) and the Michigan State Police should not be the department in charge of forensic science, especially toxicology including breath alcohol testing.
​
​I want to start by disclosing my bias: I am a criminal defense attorney and most of the time I am fighting to keep these results out of evidence in a trial. Further, I think that this scandal falls squarely at the feet of the Michigan State Police (MSP) and the Prosecuting Attorneys Association of Michigan (PAAM). The reason that I say that is because both those 2 entities have pushed the legislature and the judiciary to make a drunk driving prosecution a slam dunk.
​
​I have heard prosecutors argue this time and time and time again.
​
Consider what .08 means. It is a measurement in units, the numerator is the amount of ethanol measured and the denominator is in 210 litres of a person’s breath. It is an indirect measurement of the alcohol content of a person’s blood.
​
​A breath test result is evidence. When the prosecutor wants to admit the breath test result, the prosecutor is what we call “the proponent” and as the proponent, they have the burden to show that the evidence is reliable. Next let us consider the nature of the evidence, it is not an eyewitness or “percipient” witness - it is a form of scientific evidence. Because breath alcohol testing using an instrument that is approved for placement on the conforming products list (CPL) is considered “generally acceptable” the admissibility of a particular test is not based on the theory of breath alcohol testing but there is a 3-part analysis under a case known as People v Tipolt as modified by People v Wager.
It is the 3rd prong that is at issue in the bad breath scandal. There are administrative rules that are literally written by the Michigan State Police that govern how the instrument is maintained and verified for its accuracy. It is that 3rd prong that is harder than it may seem.
​
In order to determine that the instrument is working correctly, a trained technician will verify that it is operating both accurately and reliably by performing:
​Corresponding results tickets that look similar to a subject sample ticket are generated for each of these steps and then the technician is to assiduously complete a log to record all of the steps and all of his observations. In Michigan, this log is known as an OD 84.
​

The Issue at Hand

Here is the MSP version of what happened: The manufacturer (NPAS) of the breath test instrument that is at issue (the DataMaster DMT) sold the technology to Intoximeters, Inc., a competitor-manufacturer in St. Louis, Missouri. However, the sale actually occurred around late winter, 2015. The contract for servicing and maintaining these instruments remained with NPAS, who utilized 3 contractors:
The contract with NPAS expired on September 1, 2018 and even though it is not a publicly-known or reported piece of information, I infer that NPAS and Intoximeters agreed that Intoximeters would take over the responsibility for the service and maintenance responsibility by then.
​
Now the MSP needed to scramble on an urgent basis to find replacements. To replace Mr. Curtis, the MSP promoted Gina Gettl to Sergeant. Intoximeters hired Andrew Clark to take over the Eastern Lower Peninsula and hired David John to take over the other side of the state. In my opinion, their work even anecdotally, was sloppy. In June, 2019, Mr. Haverdink testified for me in a trial in East Lansing, in which an arrest was made in March, the person was taken to the Michigan State University (MSU) Department of Public Safety jail and a breath test was administered.
​
It resulted in a .14 breath reading followed by an RFI error message. (RFI means Radio frequency Interference, in other words the RFI precluded the instrument from producing a result). In a recording obtained for trial, the veteran officer is heard saying to the rookie officer who made the arrest that they cannot use the breath test results and have to re-administer a test because the results were not considered reliable. The next result was a .14 and the subject said she was out of air and could not give a second sample.
​
​The rule in Michigan is that the officer has to request a 2nd sample when administering a breath test but that the subject only is required to provide 1 sample in order to satisfy the implied consent act.
​​Mr. Haverdink testified about a number of environmental conditions that he observed from watching the breath room video that resulted in a likely source for the RFI and that he had been in that room a few years prior even though MSU was not in his geographic responsibility, for the reason that they were having problems with the instrument and then-Sergeant Curtis was trying to figure out the source of the problems.
​
​The jury returned a not guilty verdict within about 10 seconds.
​
​Word was getting around that the breath alcohol cases were on shaky ground, that the defense bar had a new weapon and that the records that were left behind by the new technicians from the 120 day checks were below par.
​

​While this is going on, the MSP has a new “expert” by way of a position that it created and filled on January 1, 2019. The new Technical Leader for the Breath Alcohol Program, W. Mark Fondren, testified for the first time in Michigan ever in June 2019. He testified that his understanding as to the reason for the position was for the MSP Breath Alcohol Program to attain/achieve accreditation.
​
Yet, 7 months later, in the midst of the crisis, the MSP’s own timeline revealed something really interesting: There was a request in April, 2019 for the vendor to make corrective measures. Fondren never shared this in testimony he tendered in an evidentiary hearing in July in East Lansing on 2 cases that we were challenging. Around 6 weeks before this testimony, Fondren had requested better performance or more complete performance, however you want to characterize it, from Intoximeters. Yet, he never once revealed that after over an hour on the witness stand in a case that was a head-on challenge to the proper calibration or traceability of the measurement in 2 cases before Judge Larkin.
​
​Then, within a few weeks of the testimony referenced above, MSP sent a letter to Intoximeters on August 9, 2019 through the Department of Technology, Management and Budget, outlining a breach of contract by Intoximeters and requesting a corrective action plan.
​Intoximeters provided a corrective action plan on August 21, 2019. However, 2 days later, David John (apparently) went to a jail in a location about an hour northwest of Lansing and signed the DataMaster maintenance log. However, neither MSP nor Intoximeters were notified and when an attorney questioned why the DataMaster log was signed with no explanation, the case was dismissed.
​
​More errors occurred in October and November, 2019. In fact, in November, an instrument failed its 120-day inspection and should have been repaired or removed from service but it was not repaired until December 9, 2019 and 4 subject tests in the intervening period were called into question.
​
MSP then established a unit within the Forensic Science Division (this is the division that oversees toxicology and DNA among other forensic science disciplines) and created 3 positions to be responsible for the maintenance and certification of the state’s DataMasters. So, the MSP has already decided that it is going in a different direction for the DataMaster service and maintenance program at this point in time and yet …
​
On January 2, 2020, Fondren conducts a “routine” audit of documents submitted by the contractor for the last 2 weeks of December, 2019. He notices that there were some “irregularities” for the instrument in Alpena County. A few days later, the MSP concluded that the vendor/technician “fabricated” the paperwork. The MSP audits several instruments all around the state and realize that there are other locations at which the instrument needed to be repaired but was not repaired or removed from service and the results were therefore called into question.
​
MSP also declares that there are other instances for which logs were fabricated or inaccurate. Now, all 3 of the vendors are gone, J.D. Flood claims to have retired and Messer’s Clark and John are facing criminal charges.
​

It is easy to see that there was some pre-determined outcome-based decision making here. Most telling is that the MSP announced the creation of 3 positions – the replacements for Flood, Clark and John before the so-called routine audit lead a statewide shut down of breath testing while all 203 instruments were checked. Most telling, is a report that Fondren approached a prior MSP toxicologist, Michelle Glinn, Ph.D. at an International Association of Chiefs of Police meeting and said “So you’re the one who brought that piece of junk to Michigan” – ostensibly talking about the DataMaster DMT.
​
How MSP got here is Michigan’s own fault. For decades, the whole objective was to make the administration of a breath test as easy and as fool-proof as possible. The MSP is given the statutory obligation to write administrative rules to ensure the reliability of the tests that are administered and the competency of the breath test operators. For decades, the MSP has quietly re-written these administrative rules to make it as easy as possible to pass the reliability test. Even when the rules are not followed, judges have issued opinions that disregard “technical” violations of these rules unless the violation calls into question the reliability of the test results. The legislature has made the law as pro-admission and conviction as it possibly can make it.
​
Mr. Clark was arraigned on several felony charges on Thursday, May 21, 2020. Mr. John is expected to be arraigned on similar charges once complications related to COVID-19 and court access are resolved. The MSP will no doubt throw these 2 under the bus without regard to its own role in creating a “who cares” culture. It is akin to the Wizard of Oz saying, “Pay no attention to the man behind the screen.”
​
DUI prosecutions are remunerative for the state and arrests are a must for almost every department who wants a share of grant money from the state’s Office of Highway Safety Planning (OHSP) or Mothers Against Drunk Driving (MADD).  If drunk driving is as serious as we have come to learn that it is, serious science and a correlating financial investment are important to maintain faith in the system.